Is Uranium About to Go Nuclear?

Original Article: ‘Is Uranium About to Go Nuclear?’

“ I don’t know about you, but I lie awake nights worrying about Canadian uranium. I know these people. I grew up there. You have no idea what they’re capable of doing. If Sidney Crosby hadn’t scored that goal to win the Olympic gold medal, there’s no telling what might have ensued.” – Charles Krauthammer

I don’t trade much anymore, mostly because I’m not much of a trader. Sure, I can see patterns well and predict with some accuracy which way trends will play out, but my ability to parlay those skills into short-term gains in the stock market is mediocre at best. As my friend Pony Sneer would say, I’m a better market observer than participant. I’ve evolved to the point where it’s best for me if I work to earn money in fiat, save some of it by buying real assets, and invest the rest of it in private deals or my own businesses where I have some direct impact on the outcome. Chicken, know thyself.

I still have a gambler’s account at my broker – I’m a degenerate at heart, after all, and you can’t spend most of your days covering the horse races without betting on a few jockeys – but I keep it small enough so that no single decision can impact my lifestyle, win or lose. Further, because I limit myself to trading options, I’ve only had to replenish the account twice. Okay, fine. Three times. 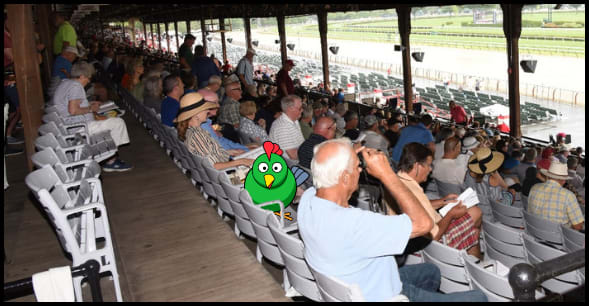 I am disclosing these things because on Thursday of last week I made a somewhat large bet in my gambler’s account and bought calls on a uranium miner. The situation in the uranium market is so interesting that I must write about it here, but you should know that I’m not unbiased. If the price of uranium continues to rocket higher, so will the balance of my account. I’m in no way recommending you consider doing the same. You do you and whatnot.

Why did I make this bet and why is the current uranium situation so fascinating? For answers, we turn to my internet-friend-that-I’ve-never-met and all-around stock savant Harris Kupperman (aka, Kuppy), author of the Adventures in Capitalism blog and founder of Kuppy’s Event-Driven Monitor, a pricey-but-totally-worth-it investing newsletter (Doomberg is a recent subscriber and member of his Discord chat room – I think I’m the only chicken in there).

Last Wednesday night, Kuppy’s latest free Adventures in Capitalism piece hit my inbox and I was immediately intrigued. Having just written about the need for nuclear energy to be a key part of America’s energy future, I was interested to learn that Kuppy was revisiting his bull case for uranium. After finishing the piece, I was reminded of the forces behind bank runs that I described in 3,170 Miles.

To summarize Kuppy’s thesis, the uranium market is in a structural deficit, uranium miners haven’t made money in forever and have not made the investments necessary to meet any significant supply disruptions, uranium buyers (the utilities) are effectively very short uranium but have become accustomed to low prices and complacent about the hurricane of risk that is brewing in the Gulf of Boredomtown, and – most importantly – there’s a newly-concocted uranium death machine gobbling up what limited supply exists in the float in a deliberately price-insensitive manner. Sounds squeeze-y to me.

When analyzing commodities, the first thing I do is search for an industry cost curve (assuming one exists). I found one from a recent investor presentation by Uranium Energy Corp, which I’ve copied below. The market price of Uranium from a few weeks ago (~$30 per pound of U3O8) would indicate almost half of today’s suppliers aren’t making any money. Further, prices would have to more than double to make the most expensive increments of uranium supply come online. 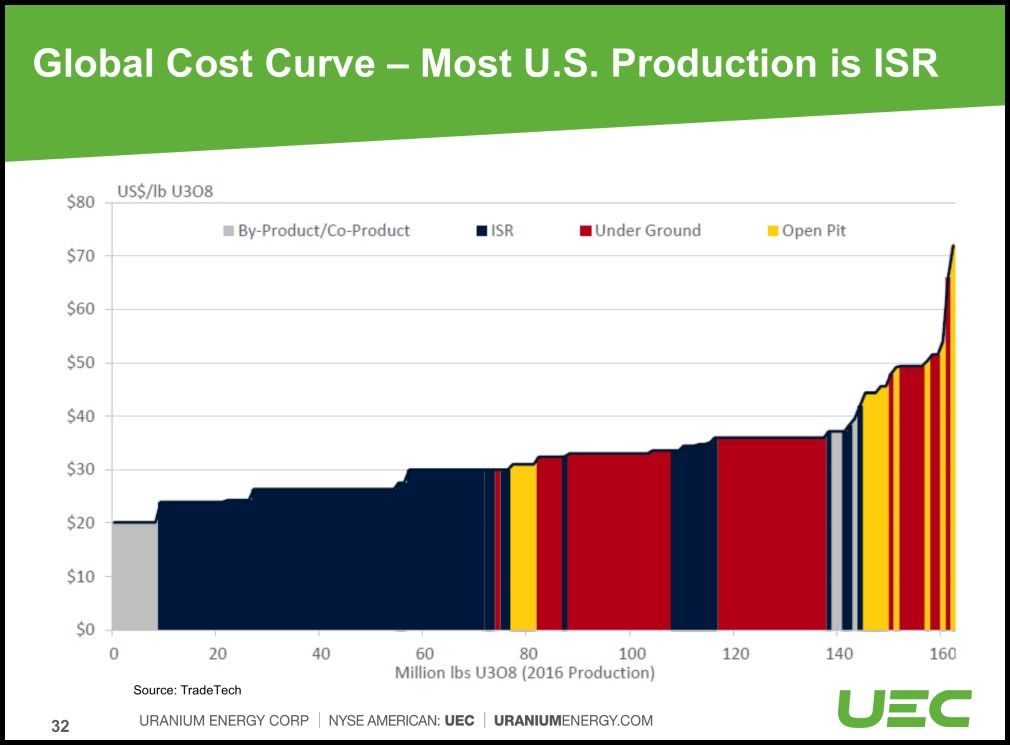 If we next consider the historical price range of uranium, we find that ~$30 per pound is ~80% below uranium’s all-time high of ~$140 per pound, which was reached in 2007. Following Fukushima, the industry became almost un-investible, which partially explains why the price of uranium has floundered for more than a decade. With the right spark, there’s plenty of room to run.

Sprott Physical Uranium Trust – run by the type of pesky Canadians that Krauthammer so feared – seems hellbent on providing that spark.

In April, Sprott announced its intent to acquire Uranium Participation Corporation (UPC) and convert it into trust managed by Sprott. UPC had just over 16 million pounds of physical uranium in its holdings (worth about $600 million), while Sprott had $12 billion in assets under management across its four other physicals trusts (gold, silver, gold/silver and palladium/platinum). Sprott is a serious player in the commodity space and their entry into uranium is a true game changer. The deal closed in July, and – wasting very little time – Sprott announced in August that they were doing a $300 million at-the-market (ATM) offering to raise cash and buy up whatever uranium was available.

One of the things I love about Twitter is how small but passionate communities of talented people congregate around specific investment ideas and never let go. Uranium twitter is one such example. Like Jim Grant waiting for interest rates to go up, members of the uranium community have been waiting for their thesis to play out for years. A few great follows include @quakes99, @JekyllCapital, @808sandU3O8, @Grainjones, @adequateryan, @brandon_munro, @TwainsMustache and @mrfriebe. I’m sure I’m leaving out many outstanding accounts, but these are a fine place to start (feel free to mention other accounts in the comments). Another member, @theAlexW, has been dutifully tracking the impact Sprott is having in the market with their recent purchases. I’ve recreated one of his charts below: 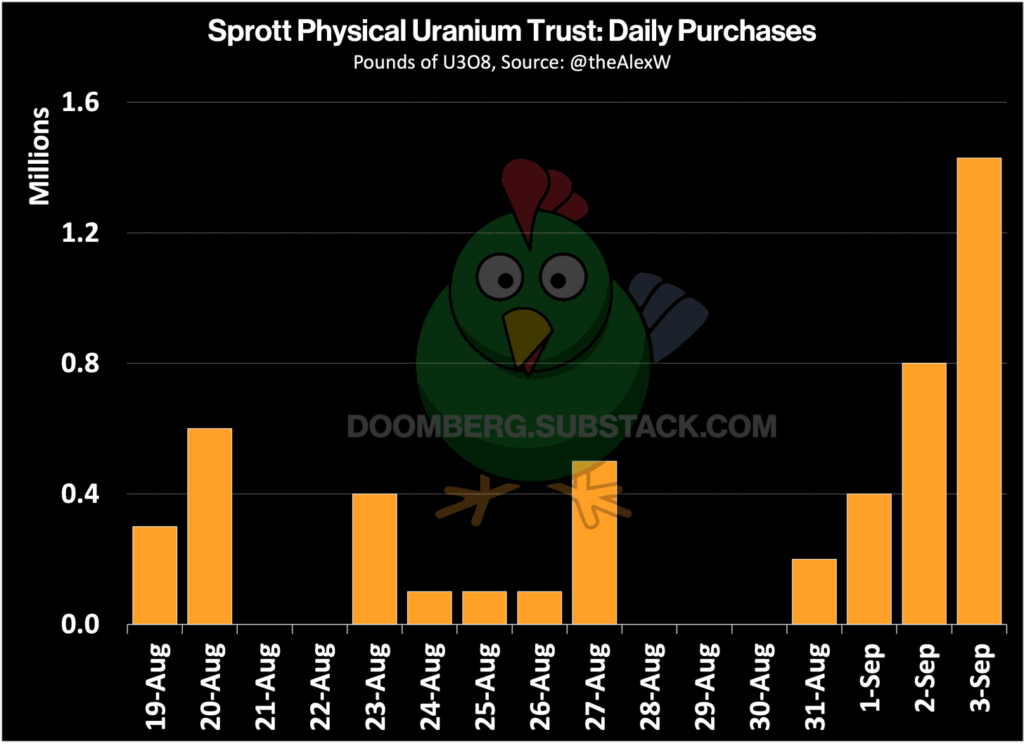 In just the two days since Kuppy published his thesis, Sprott purchased 2,200,000 pounds of uranium (800,000 pounds on Thursday and 1,400,000 pounds on Friday). If we take Friday’s pace and multiply it by 252 (the number of trading days in a year), Sprott is buying at a rate that is double the typical total annual uranium volume traded. Not double the float. Double the market. Surely, this can’t continue, can it?

I don’t know what will stop it.

Sprott has more than a third of its existing ATM left and the fund is trading at a significant premium (+11.4%) to its net asset value. In just three weeks, Sprott’s buying has pushed the price of uranium up by more than 30% to a fresh six-year high of $39 per pound. What would the announcement of a follow-on ATM of a billion dollars or more do to the market? At what point do the procurement teams at the utilities panic? Will WallStreetBets get involved? Once again, here’s Kuppy’s take:

“ Uranium is different—almost everyone who owns uranium today, owns it because they intend to consume it in their reactors—these owners are all incremental buyers going forward. In a market with a deficit, they’re all implicitly short uranium. With an entity buying up the free float, they’re going to get squeezed. We all know how squeezes work, but I don’t know of any similar scenario where the squeeze was as aggressive or blatant. The utilities are blissfully unaware, they’re eventually going to panic and pay any price for uranium as a reactor that runs out of uranium is just an expensive paperweight.”

No matter what happens to uranium from here, two things are certain. First, nothing goes up in a straight line. I expect significant market volatility in the days and weeks ahead. There’s no free lunch in the markets – as my less-than-stellar trading history can attest. Second, this will soon undoubtedly become one of the most interesting and talked about stories in the financial world, if it isn’t already. The situation is truly unprecedented. Given the critical nature of the commodity being cornered, I wouldn’t be shocked if governments eventually intervene – although I’m not sure how that happens – and I certainly doubt intervention occurs this far below the previous all-time highs.

Might uranium even make Super Stonk! status? A chicken can dream. 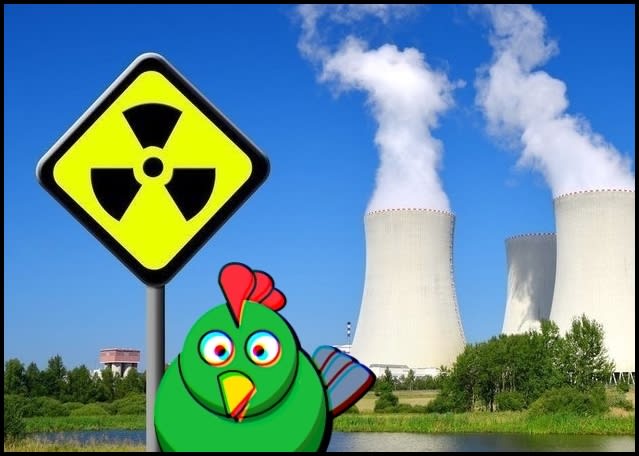